Tin Jo Restaurant is located in an old house in the cultural heart of San Jose, Costa Rica, close to theaters, museums, and galleries. Originally, the house belonged to Don Cuco Arrieta, an interesting personage who became famous as a lender (“When he squeezes, Cuco Arrieta”), and as a victim of the first kidnapping in Costa Rica’s history. In any case, a beautiful house was built, which my parents rent from their widow in 1972 after arriving in Costa Rica from China, taking refuge from the Cultural Revolution. Shortly after the restaurant Tin jo opened its doors. 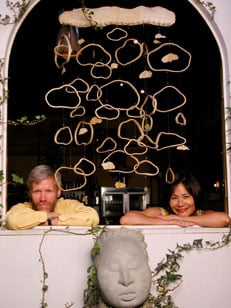 I was 12 when I arrived in Costa Rica, and I still have memories of my youth in the restaurant with its exotic mix of Chinese and Costa Rican cultures, with its light patio with the forest of giant leaves, and always the sounds of a kitchen Bustling

It was a magical time, but it also lasts for me, and as soon as I could, I left, heading for the bright lights of New York. After graduating from college I stayed in the United States, and later I took my MBA in business administration from UCLA. I worked for a while as a high technology heroine at IBM during the 1980s, and then met my future husband, Roberto, who worked as a social worker. Together we went to work in a refugee camp in Thailand. There, we fell in love with Thai food, and during a tour of other Asian countries, food from those countries as well.

From Asia, we returned to the States and settled in the Bay Area where I worked as a coordinator of the Recycling Program of the Municipality of San Francisco, and Roberto got his master’s degree in Urban Planning at UC Berkeley.

And then, something completely different. My parents had grown tired of the restaurant business and wanted to pass it on to any of their four daughters who was interested. I was the only one who was encouraged. So Roberto and I packed our bags and moved to Costa Rica, where we confused all expectations and became owners of a restaurant. 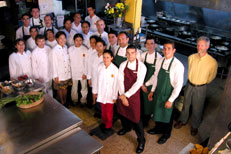 We thought we’d try it for a year or two. That was ten years ago. During this time we have grown in the restaurant in several ways: we have expanded the menu to include dishes from all over Asia, we have increased the capacity of the restaurant, annexing a neighboring building, and we have changed the decoration to reflect the varied cultures of the Asian continent. Oh, and we raised two beautiful daughters, Maya and Leila, and we saw one or two movies over there.

After ten years of our little culinary adventure, we are still here, and while we sometimes feel tired, we always love what we are doing. We are very proud of what the Tin Jo Restaurant is today, and we look forward to giving you a warm welcome on your first, fifth, or cent visit.

There were once, many years ago, a family that immigrated from a distant place called the Dragon of the East to a paradisiac place called the Switzerland of Central America. His father was called General Hon. Hon being his surname and General being him as a very strict general with his 4 daughters. He was a strong and determined man, an engineer by profession and a philosopher of passion. When he arrived, he was not able to practice his profession. He then used his analytical skills to create with his wife a Chinese restaurant in the heart of this country.

The Tin Jo Restaurant (“The Best” in Cantonese) opened its doors in 1972 with 12 tables.

The eldest of her daughters, Maria (Yin Yin was her name, but changed it to be more ethical) was 12 years old and was appointed cashier in the evenings and kitchen assistant in the evenings. He loved boning chickens and peeling carrots. He hesitated with the saloners, he competed with the cooks.

The smells, colors and sounds of this place were saturated in his blood. Many years later, after his studies in New York and Los Angeles, after his corporate life in Boston, after traveling in Asia and living in Thailand, he would return to this paradisiacal place to retake these same smells, colors and Sounds.

Together with her husband, Roberto, they took control of Tin Jo in 1994. They gradually expanded both the menu and the halls, incorporating the countries they visited in Asia: China, India, Indonesia, Japan, and Thailand.

The Tin Jo of today is the expression of a fluid evolution from the times of the General Hon to what it is today: a place where the guests feel chineado while they embargo their senses to other worlds.

It is now your turn to be transported…